Which one? (Part III) – FLIR E Series for Electrical/Mechanical Applications 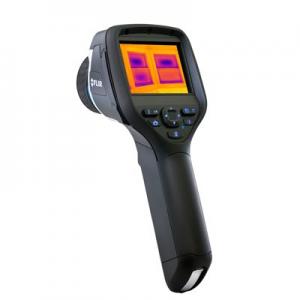 The epic saga of the FLIR “How to Choose” summaries continues with this third installment. This time around we are taking a look at the E series cameras with particular regard to electrical and mechanical applications. FLIR’s video lists the same jobs as in its i-series videos but notes that the E series is most useful for applications that require more frequent thermal camera use.

The E series provides a ton of advanced features that the i-series does not. So here goes (*inhales sharply*)… first off, the E series cameras include a visible light camera in addition to their ability to take thermal images which enables you to compare real photographs with your thermograms both onscreen (with picture-in-picture on E30 and with fusion on E50 and up) and also on FLIR Tools reporting software. Also included are an onboard LED lamp and laser pointer to illuminate and mark targets on the visible light images. Next, E series features a high resolution touch screen interface that allows you to analyze data via spot markers and area boxes right on the screen. This feature is also available on nearby smartphones and tablets via Bluetooth (E40 and up) which can stream your live data to these devices. It’s kind of bizarre, like sci-fi or something but definitely very useful. Also, on your tablet or smartphone you can instantly create professional reports from this Bluetooth data and get them to your higher-ups or repair teams right away, saving time and money.

The many bells and whistles continue with manual focus – extremely important for complete control of the sharpness and quality of your thermal images. FLIR also offers interchangeable lenses for a variety of Field-of-View options. The temperature ranges also greatly increase as you move up the line (1202°F on the E60), allowing for precise targeting of components that are overheating at super-high temperatures. Finally, the E50 and E60 feature digital zoom; and fusion capability which allows you to combine visible light images and thermal readings onscreen for better isolation and location of targets. Also, the E60 rules the bunch with 320 x 240 pixel resolution and an extra battery pack and charger for those long days taking constant readings.

Ultimately, every E series camera improves greatly over the i-series in functionality and as usual you will see an increase in thermal resolution and sensitivity as you go up the line. The E30 is similar in these aspects to the i7 but the E60 is top of the line in image quality (it looks awesome). So your choice of camera is going to relate to which features you need from above and the frequency of use you will need from your camera. However, if you want to be at the top of the game and take great quality thermograms and fusion images for fast reporting, repair and business marketing, grab the E60. Until next time...