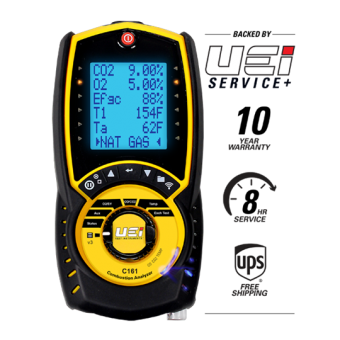 Hello all. Today we're going to look over the UEi C161 Combustion Analyzer. This is a great analyzer with some genuinely innovative features, a few of which are definitely game-changers. The main design feature that you're going to love is the EOS (Electro-Optical Sensor) sensor technology, which eliminates one of the biggest problems when it comes to owning a combustion analyzer. Let's dive in.

So as I said, the EOS sensor is the biggest draw for the UEi C161 Flue Gas Combustion Analyzer. For whatever reason, this development isn't well known in the mainstream of the HVAC field, but it really should be. We're going to take a bit of time here to detail what exactly EOS is and why it's a great thing to have. After that, we'll take a look at some of the more common yet still very useful features of this UEi Combustion Analyzer.

As you might know, traditional combustion analyzers are designed with an O2 sensor and a CO sensor. This means that they directly measure oxygen and carbon monoxide. This is a tried and true design that does indeed work quite well. However, the big drawback is that the standard oxygen sensor is "electro-chemical". Now the "electro" part of both sensors just means that the analyzer's internal battery powers them, so no change there when it comes to the UEi C161 (or any combustion analyzer, for that matter). But, the standard O2 sensor has chemicals in it that react with the oxygen in the sample to give a reading on the unit. Perhaps you're starting to see the problem. Oxygen is in the air around us constantly, regardless of whether or not you are taking flue gas readings. So, just sitting in your bag or on the shelf, a standard O2 sensor is going to be continuously reacting with the oxygen in the air and thereby degrading. This breakdown process is accelerated by doing lots of combustion testing.

What this means is that you need to replace the oxygen sensor in a standard analyzer once per year at best. Sometimes faster if you do a lot of testing. UEi wanted to fix this issue for combustion technicians, so they developed EOS technology. Instead of an O2 sensor and CO sensor, the UEi Combustion Analyzer C161 comes equipped with a CO sensor and an optical CO2 sensor. The latter sensor measures CO2 directly by using a laser process in which the CO2 gas never directly touches the sensor. The sensor has two ends or poles and fires an optical laser that is attuned to react specifically to carbon dioxide from one end to the other. The gas passing through the measurement port obstructs the laser to a certain degree, which results in a ppm concentration reading at the other end and is displayed on your analyzer. Now, from the direct readings of CO and CO2, the O2 level in the sample is calculated by the UEi Combustion Gas Analyzer. It's important to note here that there is no particular reason to measure O2 directly and calculate CO2 instead of measuring CO2 directly and calculating O2 like the UEI 161 does. It's simply just the way things have always been done, and old habits die hard, as they say.

The benefit of this whole design might be clear to you already, but we'll spell it out just in case. Because the CO2 never directly interacts with the optical sensor, it will not degrade. That means no yearly sensor replacement. That means time and money saved and a hassle that you don't have to ever worry about again. And just for peace of mind, UEi also offers a 6-year warranty standard with this combustion analyzer. It's worth noting quickly that an electro-chemical sensor for CO, which almost all analyzers use, is not really an issue because CO is so rare environmentally and even in testing conditions that concentrations are low enough that the sensors last a very long time. (just be careful not to overload them by direct exposure to high concentration CO, but this is only really an issue in specific large-scale industrial settings).

The Best of the Rest

Now that we've covered the most significant benefit of this analyzer let's take a brief look at the rest of the features before we close this out.

The physical design of this analyzer I like quite a bit. It's not bulky and has a good weight, it's "ruggedized," as they say, so it'll hold up well and has a rubber boot to protect it. There's a powerful magnet in the boot as well, so you can work hands-free. The selection mechanism is a rotary dial, which might seem a tad old-fashioned unless you've tried to work with some touch screen analyzers. Touch screens just aren't the best for this field, in my opinion. The display is well backlit and has six display lines, so you can read everything you need during a test.

There are some other nice but less glamorous features that are worth mentioning quickly. The meter comes with 8 pre-programmed fuels so you can select the parameters you need for whatever the unit you're testing is burning. There's also an AUX mode for custom parameter selection. You can log up to 30 tests in the internal memory, so you've got at least a week's worth of jobs there that you can analyze at a later date. You can also separately purchase an infrared printer that works with standard IR technology, simply meaning that you point the analyzer and the printer at each other. The battery is rechargeable and will run for 8 hours of continuous testing, so as long as you are charging nightly, you shouldn't ever run out of juice on the job.

Overall, the UEi C161 is an excellent combustion analyzer. I think most folks are skeptical of the EOS technology because it's new and not common yet. But I hope I've explained the benefits well and I encourage people to give it a try. You'll gain back a lot of time wasted and money spent on sensor replacements and still have all the accuracy of any other combustion analyzer.

For more information about UEi C161 Combustion Analyzer and a great pricing, follow this link.