Recovering refrigerant from an AC system is an essential part of a service technician’s job. That’s why refrigerant recovery systems are essential HVAC tools. These systems must meet multiple necessary, but often conflicting requirements:

Power: They must be powerful enough to extract and compress all of a system’s refrigerant in a reasonable amount of time
Portability: Refrigerant recovery systems have to be both small and light enough to carry up onto roofs, where AC units are commonly installed
Versatility: They must be compatible with multiple refrigerant types, operable over a range of ambient conditions (both hot and cold), and extract both liquid and vapor
Easy to use on the job site.

Thankfully, technological advances have made it possible to meet all these requirements, resulting in shorter refrigerant recovery times, as well as increased recovery system lifetimes.

For HVAC techs, time is money, which is why they need recovery machines which are fast, durable, and easy to use, with intuitive settings and operation.

Fieldpiece’s recently released MR45 recovery machine claims to give HVAC pros exactly what they need. The MR45 seems to be Fieldpiece’s answer to the G5Twin from Appion. In this review, we’ll analyze how the MR45 stacks up against the G5Twin in terms of features and performance. 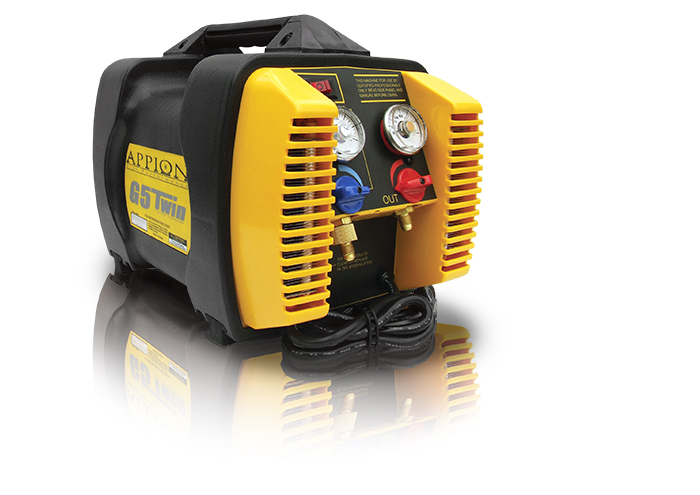 Appion presents its G5Twin refrigerant recovery machine as a powerful, durable system which can handle refrigerant in both vapor and liquid forms without issue. Many of the touted features of the G5Twin were clearly designed with reliability in mind: the sealed crankcase, proprietary wrist pin and bushing free twin piston compressor design, and the turbine fan to keep the motor and rest of machine cool.

That fast spinning, turbine fan does double duty: it works in tandem with the twin compressor cylinders and their matching dual condensers to keep the compressed refrigerant cool. This speeds recovery, since a given volume of gas exerts less pressure at lower temperatures. With the refrigerant vapor cooler, it pushes back against the compressor pistons with less force, resulting in less time (and energy) required to compress that gas back into the refrigerant recovery cylinder.

Cooling of the hot compressed vapor is therefore critical to overall recovery time, and thus better cooling means the recovery job is completed in less time, all other things being equal. As we said before, for HVAC techs, time is money. When that tech has to extract refrigerant from a roof-mounted AC unit in the summer, a faster recovery also equates to less misery.

Another notable feature of the G5Twin is the two-valve design, which eliminates the purge cycle needed on systems (like the Fieldpiece MR45) which have a single valve. The G5Twin weighs in at 24 lbs and pulls 10 amps from the 115 VAC mains.

The MR45 refrigerant recovery machine from Fieldpiece is a relative newcomer to the market. Fieldpiece positions this system as the one with the fastest vapor recovery rates in the industry.

The features which make those fast recovery rates possible are a single large condenser, a compressor with long-life ceramic coated dual cylinders, a variable-speed 1HP motor running at a max of 3,000 RPM, and the ability to compensate for power cord voltage drop (down to 95 VAC). The system reduces liquid “slogging” (the knocking which occurs when the compressor draws in liquid refrigerant and then attempts to compress it at high piston travel speed) by automatically reducing the motor’s RPMs.

When it comes specs and features impacting performance, the most prominent differences between the MR45 and the G5Twin boil down to the motors at the heart of both systems. The motor in the Fieldpiece MR45 has a max RPM of 3,000, 1 horsepower, and is actually DC powered (AC to DC conversion happens inside the machine). The Appion G5Twin’s motor produces about half the RPMs (1710), and exactly half the horsepower.

Whereas Appion proudly touts the10-blade turbine fan used to blast over 700 cfm of air throughout the machine for cooling the compressor heads, motor, and condensers, Fieldpiece doesn’t mention such internal specs (other mentioning the MR45’s “oversized condenser”). This could be a marketing decision on Fieldpiece’s part to focus attention on the actual refrigerant recovery rates, which makes sense given that’s what matters most to HVAC techs at the end of the day.

Speaking of what matters most to HVAC techs, the other headline features of the MR45 deal mainly with making their lives easier when using the machine. These are the blue light backlit large LCD display, the power cord storage built into the handle, water resistance, single dial operation (which incorporates both self-purge and recovery throttling) and perhaps most importantly, the ability to compensate for the voltage drop of a power cord (particularly longer ones).

The MR45 is able to deliver to the motor the power needed despite this voltage loss by effectively stepping up the voltage at the recovery system. This in turn causes more current draw, and the reader will recall that the max specified current draw is 12 amps, compared to the G5Twin’s 10. This voltage drop compensating feature is the most likely cause of the higher max current spec of the MR45.

The MR45 is also 2 lbs (about 8%) lighter than the G5Twin, which makes the Fieldpiece system slightly easier to carry around and lug up onto roofs.

Lastly, the Fieldpiece MR45 has integrated monitoring which automatically slows down the motor to half speed when pumping liquid (reducing liquid slugging), and alternatively doubles the motor speed when it detects that only vapor is flowing.

At the end of the day, what difference do the integrated smarts, higher horsepower and RPMs of the MR45 make on the job? How do specs and features on paper translate to recovery times in the real world?

Both Fieldpiece and Appion quote refrigerant recovery data for their machines and their competitors’ offerings for a variety of commonly used HVAC refrigerants. These rates are obtained by testing according to the AHRI 740 standard for direct vapor, direct liquid, and push-pull liquid refrigerant recovery modes.

Appion’s promotional literature doesn’t mention the Fieldpiece MR45, due to the fact the latter is still the new kid on the block and Appion hasn’t yet updated publicly available comparison charts.

Fieldpiece’s chart does include the G5Twin, however. In that chart, Fieldpiece claims across the board supremacy in vapor recovery flow rates. That’s significant because—at least according to Fieldpiece—typically 90% of the recovery time is spent extracting vapor, not liquid. Thus, fast vapor recovery rates mean shorter recovery times. Therefore, even though the Appion G5Twin beats the MR45 when it comes to direct or push-pull liquid recovery for R407c, R410a, R134a, and R22, Fieldpiece can still argue that the MR45 is the machine HVAC techs should buy.

The AHRI 740 standard does include an additional test for R22, the “High Temp Vapor Rate”, which tests a recovery machine’s ability to recover that refrigerant at a much warmer temperature than the standard direct vapor test.

This is worth mentioning since the MR45’s rate for that test is significantly faster than the G5Twin’s—and the G5Twin requires an extra cooling coil accessory to attain that lower rate.

In addition to the fastest vapor recovery rates in the industry, the Fieldpiece MR45 adds other useful features like diagnostics and line voltage drop compensation. Appion’s G5Twin has better liquid recovery rates while being only 2 lbs heavier. Which one provides the shortest recovery time will probably depend on factors such as the climate you work in and size of the AC unit being serviced.